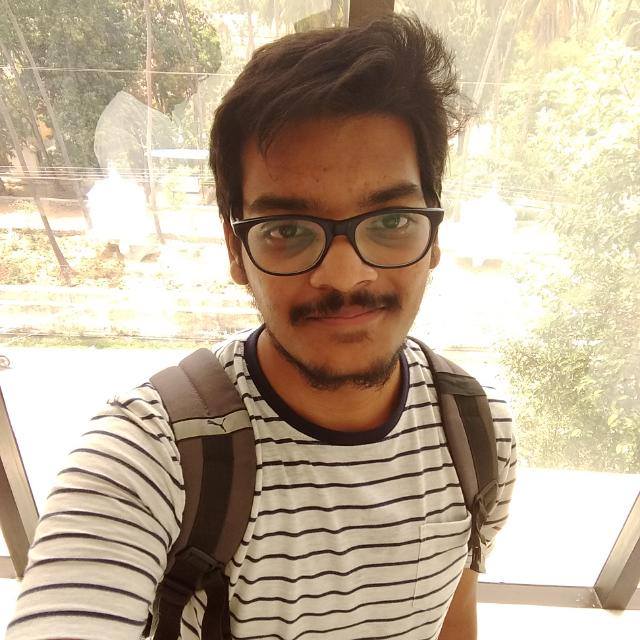 An Introduction to Buffer Overflow 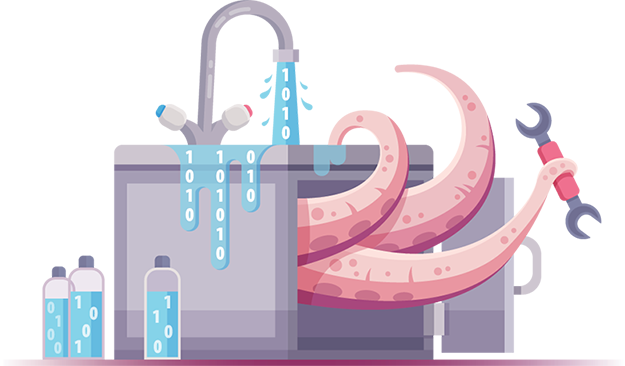 A Buffer is temporary storage usually present in the physical memory used to hold data.

Consider the most useless program ever made shown on the left image where a character buffer of length 5 is defined. In a big cluster of memory, a small memory of 5 bytes would be assigned to the buffer which looks like the image on the right.

A Buffer Overflow occurs when more data is written to a specific length of memory such that adjacent memory addresses are overwritten.

Let’s take an example of a basic authentication app which asks for a password and returns Authenticated! if the password is correct.

Without really knowing how the app works, let’s enter a random password.

It says Authentical Declined since the password wasn’t correct. To test buffer overflow, we need to enter large random data.

You must be wondering why it got authenticated and why there is a Segmentation Fault!. Let’s see a more detailed version of the app.

As you can see, there are three variables: auth, sys_pass, and usr_pass. The auth variable determines if the user is authenticated or not depending on the value(initially 0). The usr_pass stores the password that the user enters and the sys_pass variable is what the correct password is.

You may also see how the variables are stored in memory. Since the address is in hexadecimal and there is a difference of 1 therefore, usr_pass and sys_pass variables are buffers of length 16.

To test for Buffer Overflow, a long password is entered as shown.

Note: C functions like strcpy(), strcmp(), strcat() do not check the length of the variable and can overwrite later memory addresses which is what precisely buffer overflow is.

Refer to the code below for better understanding.

Note: This might be the most unrealistic example and only meant for understanding purposes. You may not see such situations in real life.

Let’s dive a little deeper into the concepts now.

Division of Memory for a Running Process 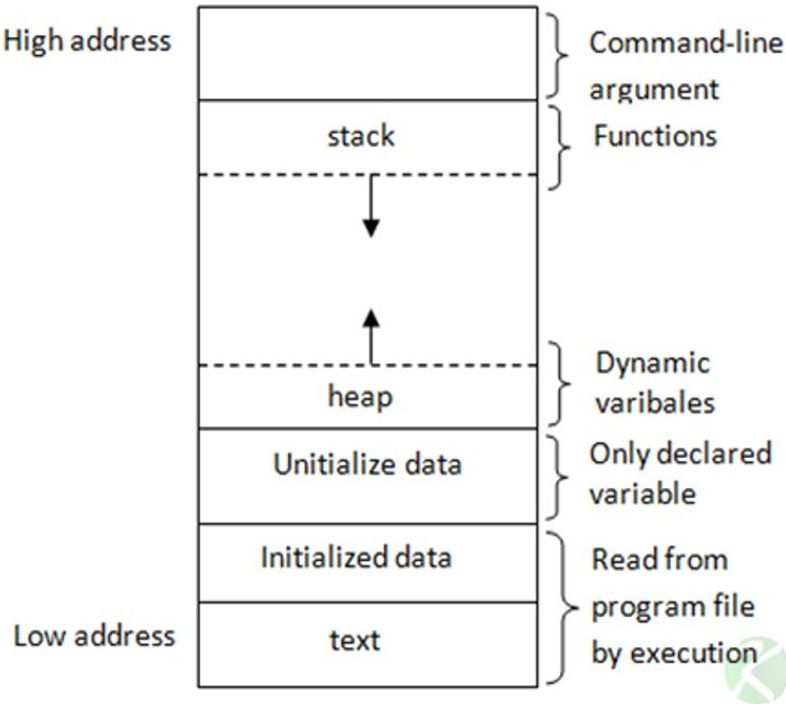 This is how the memory assigned to a process looks like. There are various sections like stack, heap, Uninitialized data etc. used for different purposes.

You may read more about the memory layout here: Memory Layout of a Process.

This blog focuses on Buffer Overflow in Stack so let’s look at that. 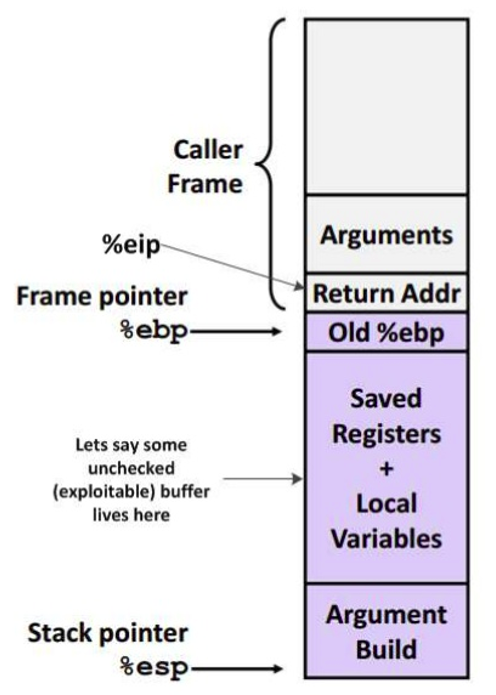 The above image shows how a stack looks like. It might look intimidating but trust me, it isn’t. Let’s see some important points related to the stack

Here a,b and c being the function parameters are stored above the EBP.

Here x,y,z being local variables to the function are stored below the EBP.

It’s time to get into Buffer Overflow exploitation using stack.

Before that, let’s try to understand how a stack is built for any function.

Taking an example below: 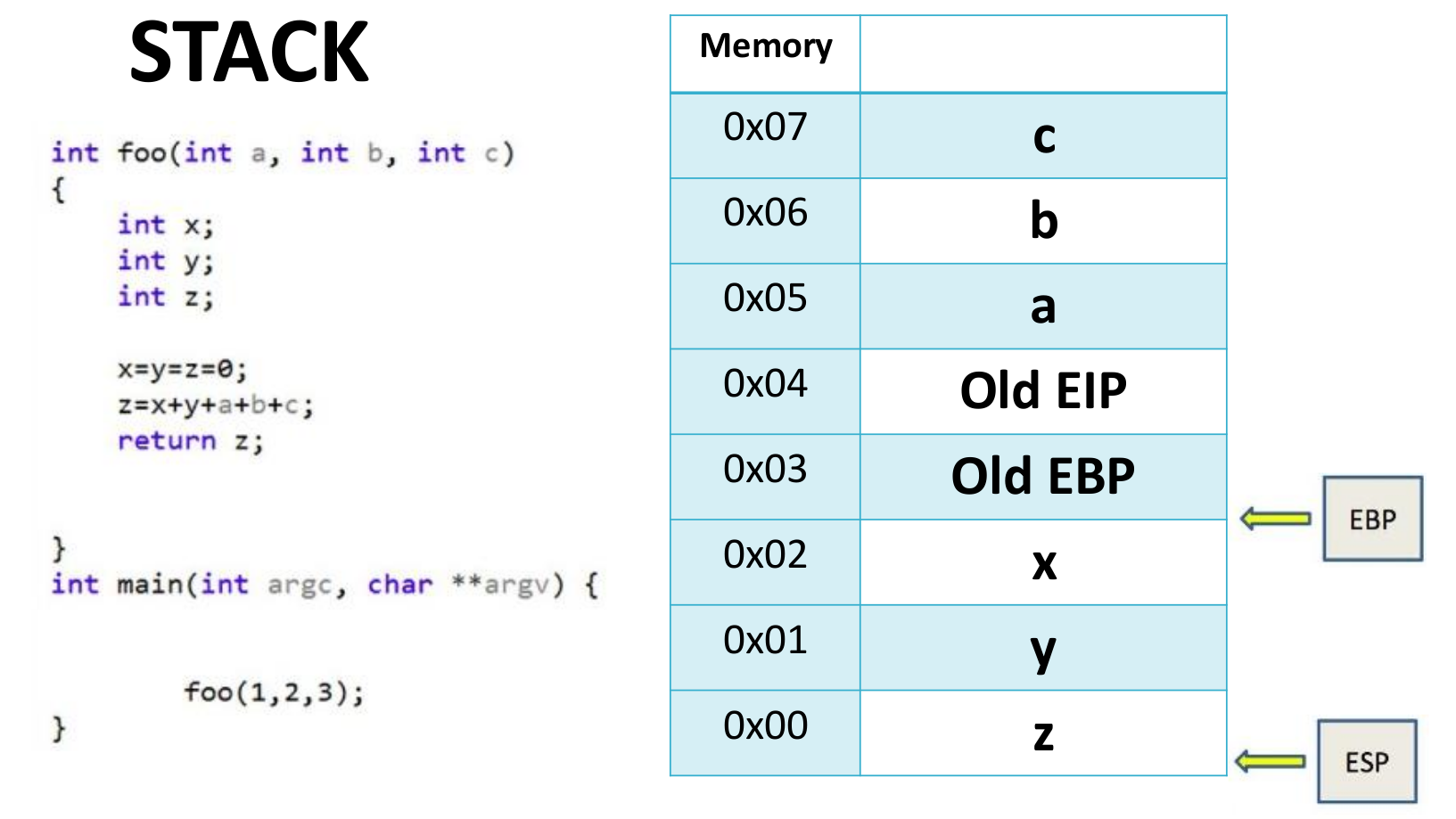 The stack on the right is of the function foo as seen on the left image.

Now, as shown in the previous demo, you could see how Buffer Overflow took place using the local variables. 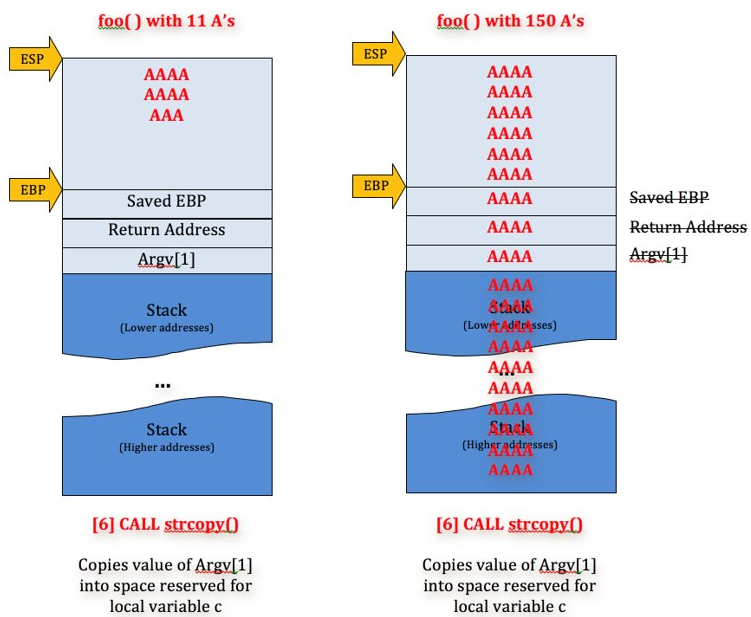 Imagine a situation where you overflow the variables x,y and z in such a way that Old EIP is modified and stores the address of the memory where the malicious code is placed.

Refer to the below image for better understanding. 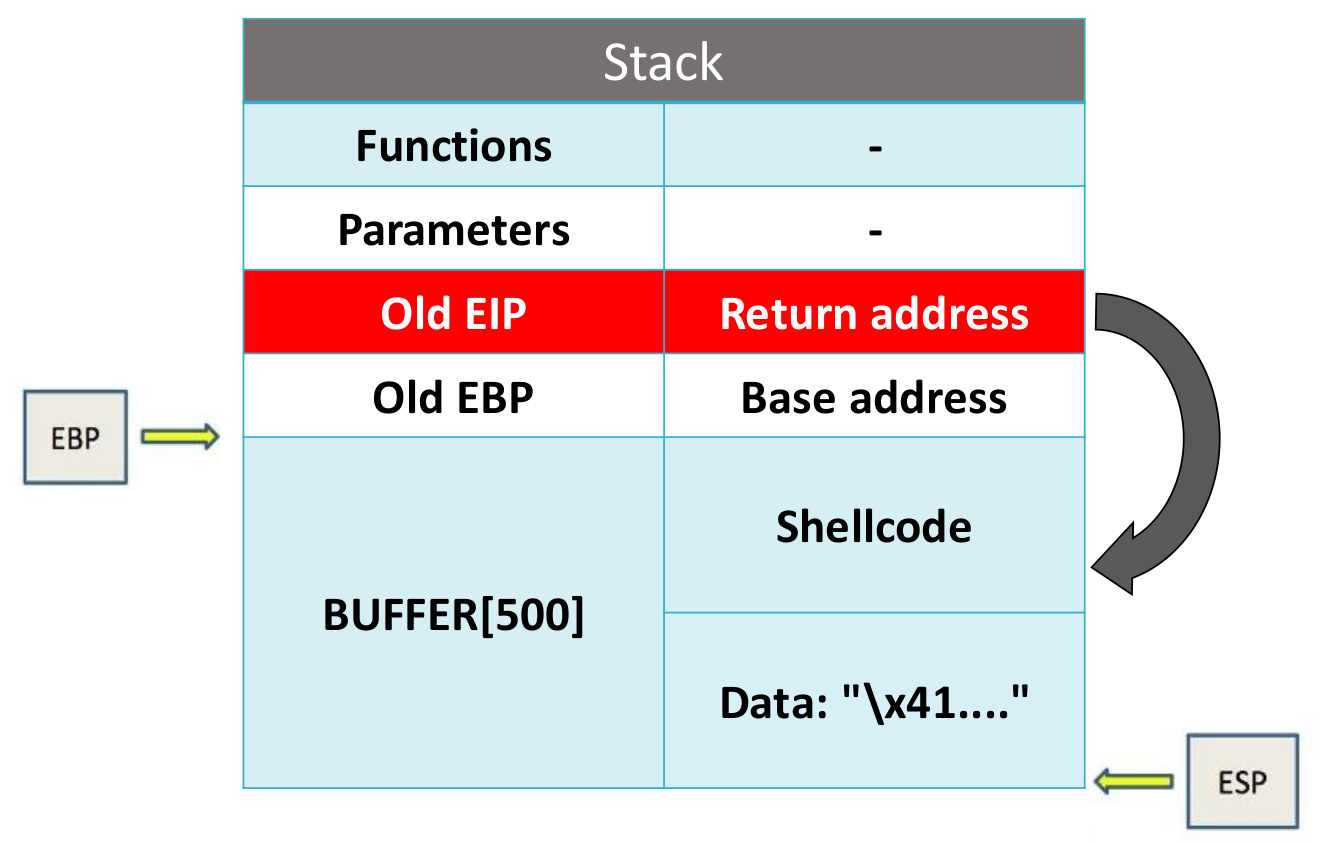 Assume a buffer of length 500 defined in a function. Now it is overflowed in such a way that it has some random data, followed by the shellcode(malicious code) and then the Return address which points to the shellcode.

This is pretty much how Buffer Overflow happens.

You must watch this video Buffer Overflow Attack - Computerphile to get a more realistic idea of Buffer Overflow. The codes used in the above video are present here.

Note: Even after these measures are taken it might be possible to exploit Buffer Overflow. Therefore, these are just layers of security which can help to prevent exploitation of Buffer Overflow.

This blog is based upon a talk given by me at the null monthly meet on 22nd June 2019. A big thanks to Riddhi Shree for helping me out with the talk and providing me with appropriate resources. Without her that talk might have not been as good as it was.